Stretch in the City By Sally Brown

Stretch in the city 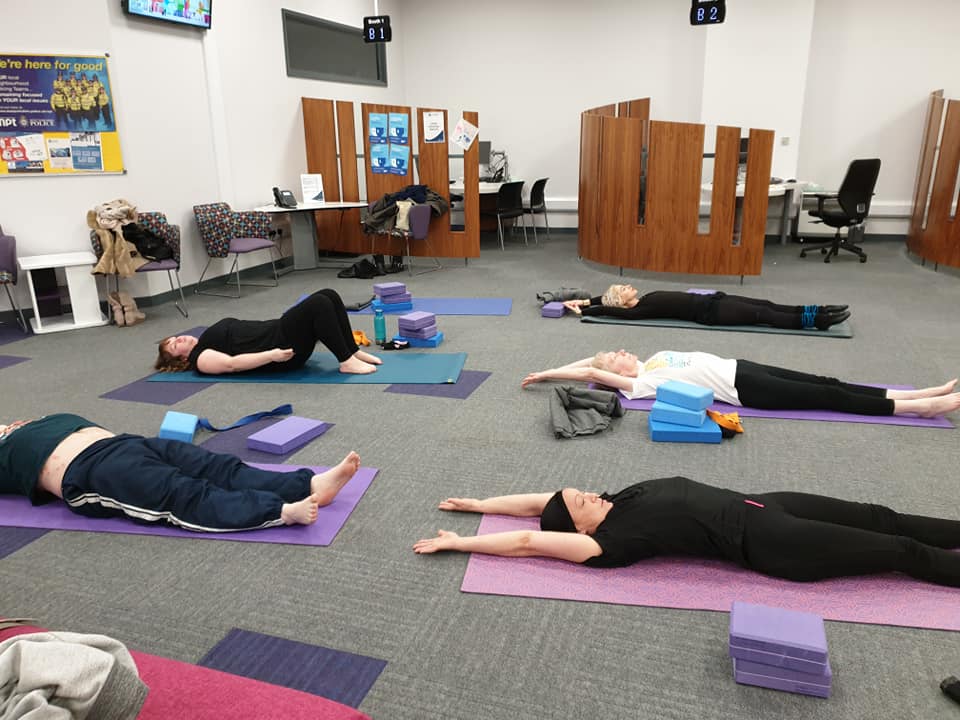 Some people might not view my weekly community yoga class in inner-city Leeds as a success. Squeezed in the corner of a busy drop-in centre and library it was never full, people came and went, few stayed for long. It was difficult to relax with noise and bustle from beyond the pop-up banners used to create a temporary space. But, to me, this class was a success. Not because it had huge numbers, good publicity or made money. But because so many people experienced and benefited from yoga when they might not otherwise have done.

The class was funded by the local council as a free service for an area that faced challenges. The community was diverse, unemployment and crime rates were high. There was a large percentage of high-density housing and few shared or green spaces. My aim was to offer an hour a week when people could relax, leave their worries at the door and to move in a healthy way.

Running the class wasn’t always easy. The centre was busy, noisy and sometimes even shut. But many people said they enjoyed it and a diverse range of people took part during the 18 months it ran. And I benefited too. As a result of the class I’m now researching yoga for a PHD at Leeds Beckett University, looking at barriers preventing under-represented groups taking part in yoga. People doing yoga in this country might currently be mostly white, female and university educated, but my Leeds class showed that many other people want to benefit from it too.

I remember one of the first classes I taught at the centre consisted of a young mother and baby, a teenage boy and a male personal trainer in his 30s. I spent the beginning persuading the teenagers’ friends not to disturb the session, the middle entertaining the baby so her mum could join in, and the end wondering why the personal trainer left before Savasana. The following week a middle-aged woman and her mum came along - it was a lovely to see two different generations moving together. But English wasn’t the mother’s first language and she had hearing and sight difficulties. So eventually they both stopped coming. For some time, a couple in their 40s came together, but then their NHS work schedules meant they had to drop off too.

A group of young teenage girls joined in for a while. Their natural energy seemed to make it hard for them to be calm, quiet and still. But they said they enjoyed it and I hope their weeks on the mat gave them pointers for finding inner peace. Regulars from the Zumba class held in the same venue came for a few weeks. But they stopped because they felt uncomfortable with visualising things like a tree in Tadasana. Later a different group joined after losing their local Pilates venue and they became the backbone of the class for many weeks, right up until it was forced to close due to Covid.

When one week a group of older Asian women turned up, I felt self-conscious about teaching them aspects of their own culture. But it turned out to be a fun and appreciated session. The women laughed and joked their way though moves half remembered from their childhoods. They thanked me at the end for reminding them of something they knew and valued but had forgotten. Throughout much of the 18 months, there was a solid core membership who kept everything going. A retired woman, doing her first ever yoga, a man in his 30s living with a mental health condition and a young woman who worked for the council. Thank you all.
It was a genuine pleasure and a privilege to have taught this Leeds community class in person and I hope to again in the future. In the meantime, I’m offering the class online. I also hope that my teaching and my research will help to make yoga become as accessible and as diverse as possible.

As a writer and researcher in the field of sacred movement and sacred sound, yoga, and meditation I pen a blog as well as journals and articles for your perusal.

My area of particular interest and research is the history of the colonization of yoga and the diasporic, emergence of contemporary yoga in Britain. Looking at societal impact and social justice. Are we losing the spirit of yoga? Whose yoga is it anyway?

I have been teaching yoga for over 30 years, Founder, Director of Amasu Yoga School and have had the good fortune to meet some wonderful students.